LIVONIA, Michigan – Livonia-based global logistics firm Global Transportation Management (GTM) joined a growing base of donors to support the work of Team Fox Detroit, a Southeast Michigan-based advocacy group dedicated to helping find a cure and new therapies that improve the quality of life for people living with Parkinson’s disease.  Team Fox Detroit has created a thriving fundraising organization which has raised over $1.1 million for Parkinson’s research since its founding. 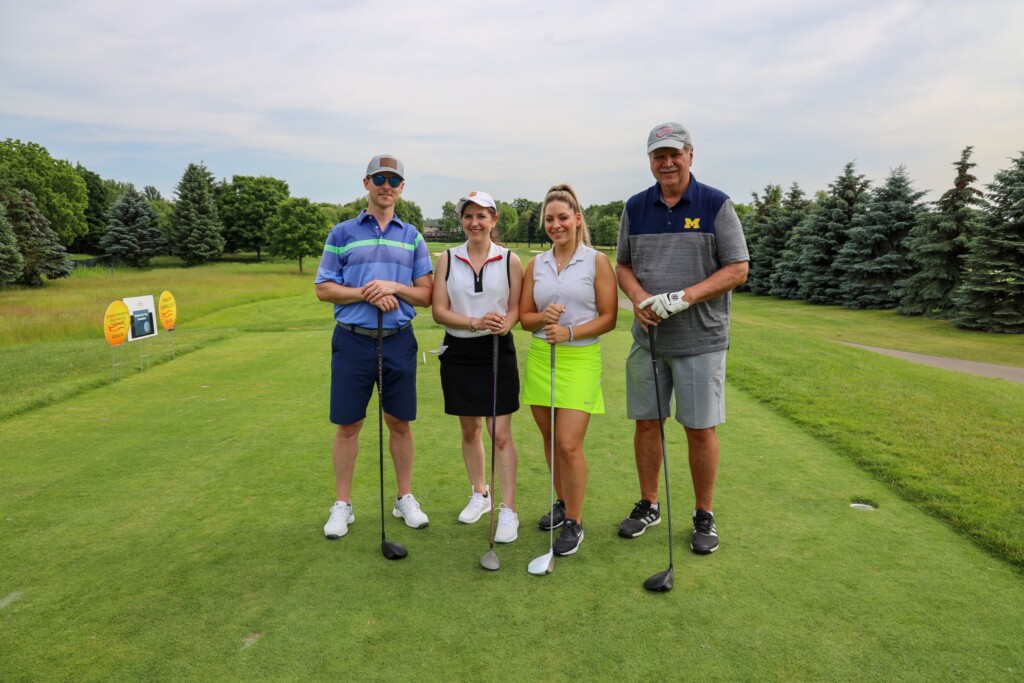 Most recently, GTM supported Team Fox Detroit’s 2022 golf outing as a silver-level sponsor, and is working to spread the word to other businesses to join them in building the group’s momentum. For GTM’s co-owners Robert Gruschow and Mark Brodie, they view Team Fox Detroit’s demonstrated commitment to maximize the impact of every dollar to directly funding high-quality research as an invitation for other companies, big or small, to join in this effort.

“It’s very empowering for us, as a company that lives by the success of every single shipment we deliver, to put our support behind a grassroots organization like this, which has such a clear and measurable impact on this disease, and is posting new results constantly,” said Brodie.  “When you look at the benefits that Team Fox Detroit brings to the community as a whole, not only the fundraising, but the sense of community and common purpose, connecting friends and loved ones with the latest information regarding emerging therapies, we can see that our contributions are making a difference, and that we’re an active part of finding a cure.”

For GTM, leading with philanthropic donations is nothing new, having supported the Michigan Humane Society, Operation: Good Cheer, Focus: HOPE and Gleaner’s Food Bank over the years, among others.  However, the company also has a personal connection to the work of Team Fox Detroit, as GTM founder Mark Brodie’s daughter, Lauren Traub, has been an active committee member with the organization since 2018, the same year she was diagnosed with early onset Parkinson’s.

“It’s vital to our mission to shine a light on the growing numbers of neighbors, friends and families who are affected by Parkinson’s, and to put a face on this disease that affects people of all ages, all ethnicities, women and men, anyone,” said Traub.  “People need to know that this is an emerging disease, and the numbers are going up all the time.  However, we also want people to know that their support goes directly to a very active group of researchers and activists working together to find out more about what’s causing this, how we can slow the progression down, and ultimately how to prevent it.”

“The current state of Parkinson’s research is a thriving field, which is producing so many new advances and discoveries, day after day – it’s very exciting and inspiring for our community to see the direct connection between our financial support and the development of new treatments and therapies,” said Traub. “We can see the direct impact of the work we do on a local level to advance this vital work that is helping produce new therapies benefiting millions of people living with Parkinson’s.”

“In addition to raising funds, Team Fox has brought together a community that many of us didn’t know existed before, where those who are affected by the disease, either themselves or their loved ones, can come together to find fellowship and support,” said Traub. “It’s been very reassuring to be able to have access to new studies and conferences that provide ongoing updates on the most current information and experts, learning together about what the latest research recommends for better lifestyle choices, therapeutic practices that can slow the progression of the disease, and what new advances are moving us toward a cure.  It’s incredible to be able to ask questions directly to experts in the field and to be involved in contributing to their work.”

“At this stage, the work of our chapter and many others across the country has enabled researchers to try to find biomarkers that will aid in early detection, which is key to slowing the progression of the disease, and partnering with local agencies like Quest Diagnostics, who are working on tailored therapies and studies that move the work forward,” added Traub. “But the key is getting people together, letting them know that there is this community they might not have known about without the support we’ve gotten from our donors and the volunteers who make these events happen.” 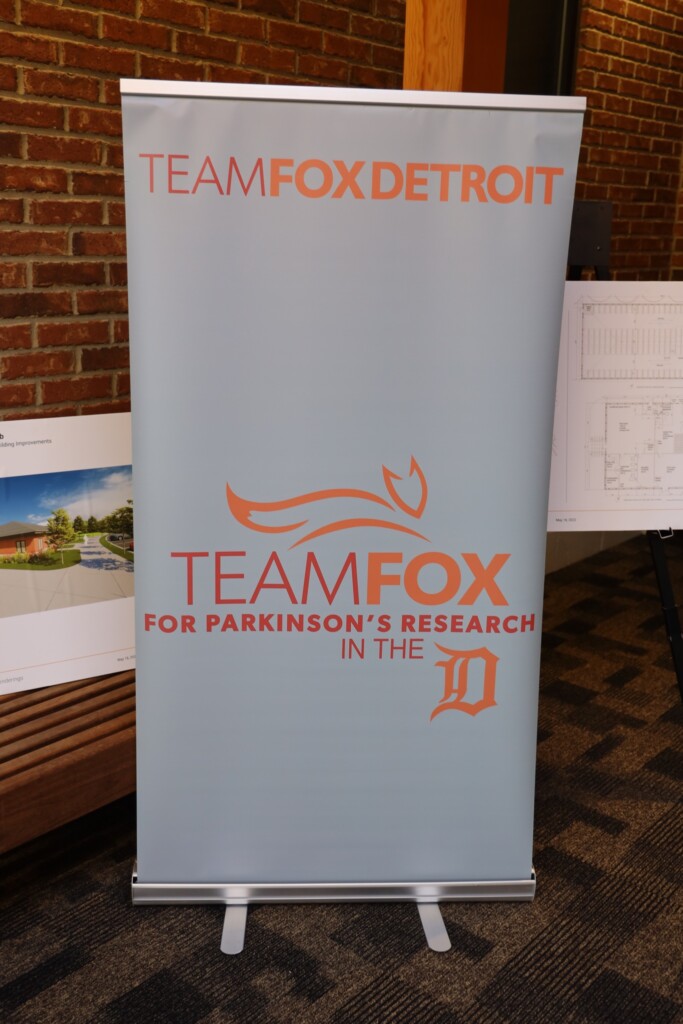 Team Fox Detroit is among a worldwide network of grassroots fundraising organizations that supports the work of The Michael J. Fox Foundation for Parkinson’s Research, which accelerates high impact science through smart risk-taking and problem solving with a commitment to urgency and efficiency.

“It starts at home, with your family and your friends, with a goal to help find a cure and go out of business, it’s as simple as that,” said founder Donna Rajkovic, who was diagnosed with Parkinson’s in 2012, and continues to lead Team Fox Detroit with a dedicated committee from the same kitchen table where the group first came together. “Because of the generosity of several donors, 100 percent of the funds we raise goes directly to research, and not a lot of groups can say that.”

“When you know that every dollar you raise is fueling research, and the research is producing new therapies that you and your friends can benefit from, it makes everything we do feel more urgent, knowing that the next event we pull off can push forward some new discovery that will provide relief and hope to someone we know and love,” said Rajkovic.

Parkinson’s is the fastest-growing degenerative neurological disorder in the world.  Currently, there are over 6 million people worldwide living with Parkinson’s disease.  Driven primarily by people living longer, this number is projected to double to over 12 million by 2040. For Team Fox Detroit, that forecasted increase has inspired the group to expand and diversify their approach to traditional fundraising strategies.

“I was not a fundraiser or organizer before this – I was not an athlete, and I don’t do runs,” said Rajkovic. “But one thing I love to do is throw a party, and so in 2016 we hosted our first gala which led to a series of special themed annual galas.  Parkinson’s patients experience both motor and non-motor symptoms so it was only fitting for our 2019 themed gala to be called ‘Team Fox Detroit Rocks The Arts.’  We showcased original artwork by members of the group and auctioned them off. Therapies that incorporate activities such as art, music, dance, singing and even boxing can play a crucial role in maximizing function in PD.”

“We encourage everyone to keep moving, do whatever they can do, because every day is a new day that you can do something incredible to make a difference in your life,” added Rajkovic.

Over time, Team Fox Detroit has built up a growing roster of supporters and donors, growing steadily even through the pandemic.  Supported by over 40 local organizations and individual sponsors, Team Fox Detroit hosted their third annual charity golf outing in August 2021, raising over $50,000 for new and emerging research into preventions and therapies to combat Parkinson’s Disease.  Held at the Walnut Creek Country Club in South Lyon, the event, one of Team Fox Detroit’s three major annual fundraisers, drew a crowd of over 150 supporters, families and friends to raise funds and awareness to combat the progression of the disease.

To make a donation, and to participate in upcoming events, visit www.fundraise.michaeljfox.org/TeamFoxDetroit/Donate/Tickets.  Team Fox Detroit is a registered 501(c)3 organization; learn more at www.teamfoxinthed.com.

Global Transportation Management (GTM) is part of Deshler Group. Based in the Detroit area, Deshler offers global solutions, from IT, supply chain management, manufacture and assembly to storage, packaging, distribution and transport.

*No signature is required to enforce the provisions of these agreements; rather, both parties accept the terms and conditions contained therein, upon partial or full performance of any shipment tendered to/from GTM.

Get a Quote
Our Team
Locations
News and Updates
Careers

Get a Quote
Our Team
Locations
News and Updates
Careers

Global Transportation Management (GTM) is part of Deshler Group. Based in the Detroit area, Deshler offers global solutions, from IT, supply chain management, manufacture and assembly to storage, packaging, distribution and transport.

*No signature is required to enforce the provisions of these agreements; rather, both parties accept the terms and conditions contained therein, upon partial or full performance of any shipment tendered to/from GTM.